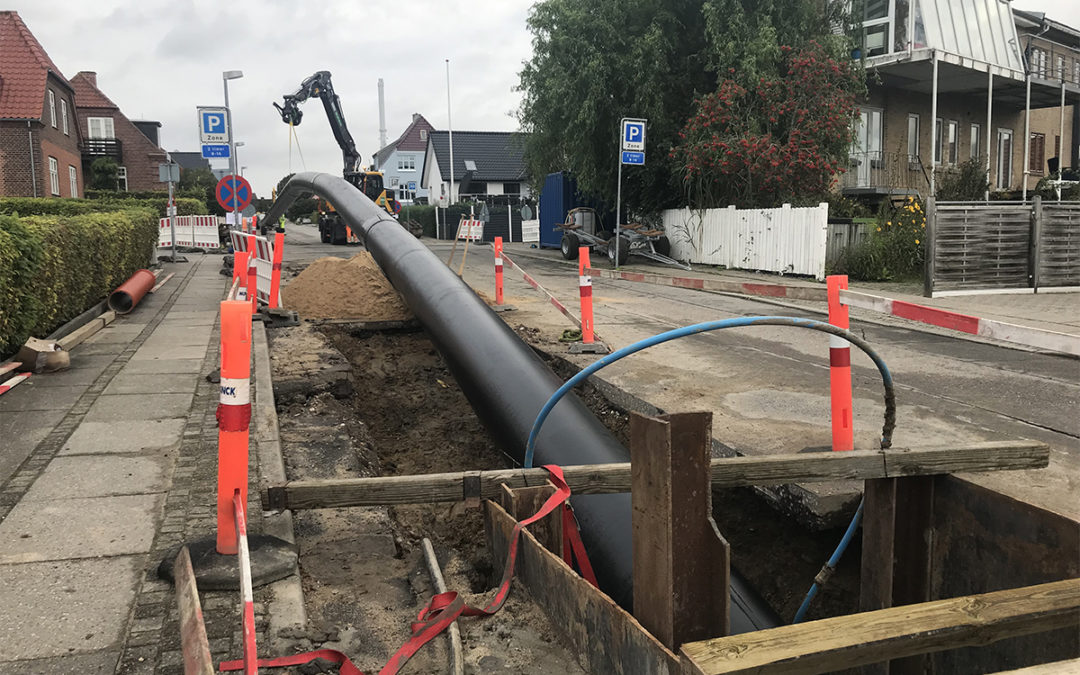 When 200 km of pipes and 180 km of service connections is to be buried, it is impossible to avoid inconveniences for the citizens. Many roads need to be dug up, which can cause traffic issues, broken roads, and frustrated citizens. In order to protect the surrounding environment, the solution in Horsens has been to use trenchless technology on the sections where it makes sense. Trenchless technology is an almost excavation-free directional drilling method that saves time and damages the environment as little as possible.

Thorough planning is a necessity

One of Horsens’ directional drillings is on the stretch between Langmarksvej and Langelinje, where the pipework is complicated and the space is limited. On the route, a supply line is laid from the main plant to a heat exchange and pumping station so that the district heating can be distributed to the suburb Stensballe.

Project Manager Michael Pedersen from Fjernvarme Horsens notes that while unforeseen challenges can arise when pulling a pipe through the ground, thorough planning can reduce the risk of unpleasant surprises.

— We can meet something in the soil that we cannot take into account, such as large stones or a soft ground. Then there are other factors, such as wires or sewers, but all this we can plan our way out of and uncover before we start the drilling, says Michael Pedersen.

A faster solution benefitting the consumers

Project Manager Michael Pedersen goes on to say that if a traditional excavation had been chosen on this particular stretch then the work would have lasted around twelve weeks, but since trenchless technology can be done, the work will be finished in four weeks.

— There is a big difference, so of course it is something that weigh in as we make the decision. On top of that, there is extra time pressure on this particular supply line, as we need to get heat through before Christmas, informs Michael Pedersen.

Since the district heating project in Horsens is so extensive, Fjernvarme Horsens has a general focus on avoiding nuisance to the citizens.

— Trenchless technology is the best option in many cases. Citizens are given a quick solution and more space on the road while the work is being done, Michael Pedersen concludes.

This project is merely a small part of a much larger district heating plan, that was passed in 2015 in connected with the municipality’s strategic energy plan. The work in Horsens will extend over a period of nine years starting 2015.

The goal of the district heating plan is a complete conversion of the urban natural gas-heated sites with the aim of reducing the burning of fossil fuels. The environmental effects of the district heating plan are definitely not without significance. For every household that switches from natural gas to district heating, CO2 emissions will be reduced by about 85%, and with the municipality’s strategic energy plan the total CO2 emissions will be reduced by 600,000 tonnes over 20 years.

isoplus plays an active role in the project

Since the district heating plan was enacted in Horsens in 2015, isoplus has delivered more than 100 km pre-insulated pipes to Fjernvarme Horsens in dimensions from ø33+33/180 to ø219+219/710 in series 3. isoplus has also contributed with alarm and pipe drawings as well as project design. With such a large project, it is important to have a good collaboration, and to that Michael Pedersen states:

— The collaboration with isoplus works really well, and a big reason for that is that isoplus is so visible and choose to participates in the construction meetings.

For isoplus, it means a lot to be an active part of the project. Openness, dialogue and presence are at the core of our business, and it is also something that Fjernvarme Horsens has noticed.

— isoplus is very hand-on on the project and attentive to where we are with the deliveries and when we start in the different areas. They know what we need to pay attention to, whether we need to order more joints or have some custom-made bends made, Michael Pedersen concludes.