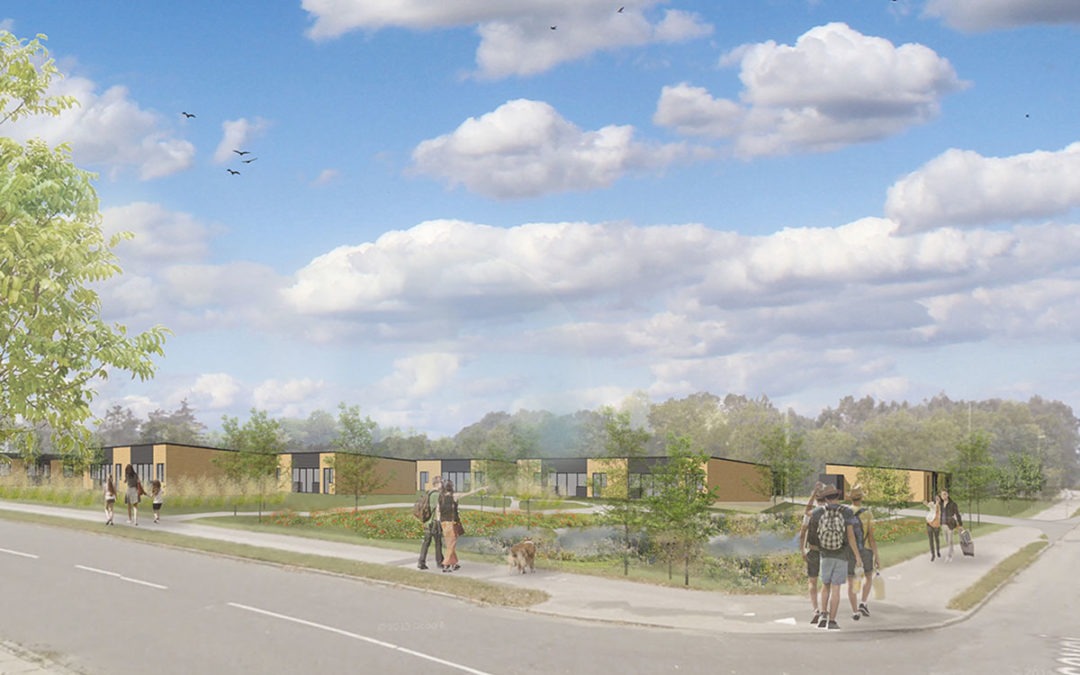 It is not every day that you see a district heating plant established in a place where district heating did not previously exist. But in Juelsminde, Hedensted District Heating has thought along different lines. When the housing association JAB on the Juelsminde peninsula plans on having heating distributed to a new 33-houses development, supplies will come from a brand-new plant provided by the district heating company.

– We have discussed various solutions to provide heating and various interested parties were in the picture. Actually, it had been decided to install heat pumps in each house, but at the very last minute, Hedensted District Heating suggested to establish a small plant that should provide district heating to all 33 houses. The solution was so attractive that we decided to change course, Henrik Alleslev, manager of JAB, says.

The heating plant will be based on an air-to-heat pump which will circulate the heat to the citizens in a closed system.

JAB’s investment in this public heat supply system is lower than the investment in an individual solution would be. At the same time, the heat price for future heating will be lower, too. Architecturally and with regard to noise issues, the overall centralised solution is definitely better.

However, Henrik Alleslev sees another serious benefit, i.e. the housing association avoids a lot of practical issues – for instance reading of heat meters for annual statements and relocations, technical operation of the network, etc.

– It was an important aspect to ensure that the district heating company handles daily operations, services the system and manages settling of accounts with the consumers. This means less administration for the housing association and better service to the residents, the manager emphasizes.

Technique and settlement of accounts under control

– This is precisely our major force: we know how to measure and manage settling of accounts, we are in control of technical issues such as pipes, valves, etc. We offer 24/7 service throughout the year so customers never have to worry about the heating supply, he underlines.

Hedensted Municipality has singled out Juelsminde as an evident area for district heating supply; therefore, this project in line with the municipal strategy and also meets the national vision of future fossil-free heat supply.

The heating plant was designed as a mobile building that can easily be used in another site.

– Delivery time is part of the concept, so the heating plant can never be considered a waste of resources. In case it is decided to extend the distribution network at a later point of time, this is possible as well, Torben Alex Nielsen underlines. He adds that a feeler has already been thrown out about new connections to the heating network.

A model that may set a fashion

The pioneering project is a part of Hedensted District Heating’s five-year strategy for product development and innovation in the field of district heating. The “Juelsminde model” may very well inspire, set a fashion and benefit small urban communities, the plant manager says.

– I have several times voted against laying district heating pipes to small communities because we doubted that it would be profitable. However, large scale heat pump technology for instance has now become so good that is a cost-efficient option like in Juelsminde. That is why I am thrilled about the idea of establishing a small, temporary heating station to provide the supplies until the volume is big enough for us to lay the pipelines, Torben Alex Nielsen notes.

According to Torben Alex Nielsen, one of the reasons for the project’s success was the prompt delivery of district heating pipes – even though the order was placed at the last minute.

– Once the agreement with the housing association had been reached, we had to start quickly, and we are happy that isoplus had all district heating pipes and components we needed available in their warehouse, the plant manager says.