District heating under the inlet in Hadsund 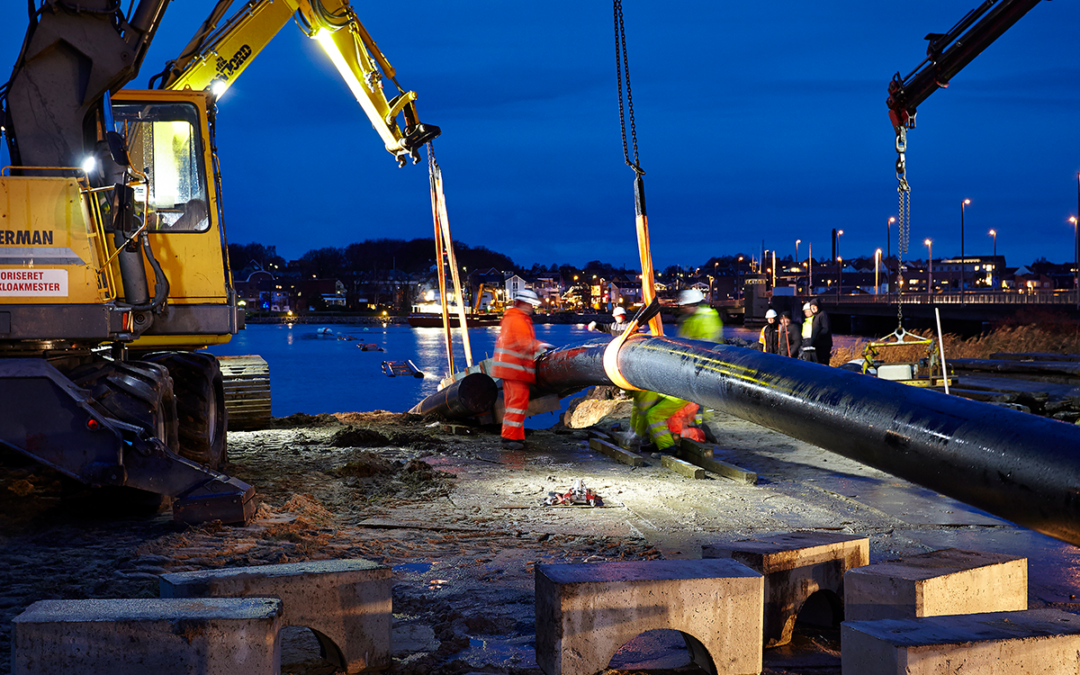 Establishing a 300-meter district heating pipeline may not sound all that spectacular, but there was something special about this project, when the southern part of Hadsund was connected to the northern city’s district heating. The pipe had to be laid 1 meter below the fairway in Mariager Fjord – 9 meters below the surface!

isoplus was involved throughout the planning phase, and was responsible for design plan and calculating the quantity and placement of the concrete blocks that ensure the pipe sinking and follow the inlet’s profile.

Also for project manager Karin Mortensen from the contractor company Palle B. Thomsen, the task was quite unusual. There were not really similar projects to support and draw on experience, so it was an exciting academic challenge to solve.

— But of course, we felt butterflies when we started. We were all very excited to see if everything happened as planned, says Karin Mortensen.

The Bodil storm pushed the work

It may sound relatively simple, but there was pressure on the work on several fronts. In part, the work meant that ship traffic in the inlet was suspended, and partly because all of it was going on, while the storm called Bodil was heavily on the march.

— Had it been the day after, we would have had to cancel. And having to apply for work permits several weeks in advance because it interrupts shipping traffic, it had delayed us greatly. But fortunately, we were done just a few hours after a long working day, says Karin Mortensen, who praises the collaboration with isoplus about the challenging task.

— It was an unusual exercise, but the result is very satisfactory. We can only be happy of the efforts of Palle B. Thomsen and isoplus, notes Bo Holt Andreassen.

With the help of the inlet pipe, Hadsund Fjernvarme can now supply 120 consumers with district heating from the wood chip plant on Fabriksvej in the northern part of the city.